Darkness, Season 1: The Orange Tree is a documentary podcast series telling the story the 2005 murder of 21-year-old Jennifer Cave. The brutal crime scene at the Orange Tree Condos in Austin’s West Campus area shook the city. Two top University of Texas students were convicted and three families’ lives were changed forever. Haley Butler and Tinu Thomas delve into court documents and interview key characters of the murder in this riveting true-crime podcast. Get updates on the podcast and follow us on social media @orangetreepod.

A few days after Colton Pitonyak and Laura Hall were found in Mexico, Laura is called in to pick up her impounded car’s keys at the Austin Police headquarters. When she shows up, she’s led to a small room to be questioned by the police. Detectives are trying to figure out what her involvement is in the crime. She waives her rights to having an attorney present during an eight-hour interrogation. Her version of what happened the morning Jennifer Cave was killed sets in motion another major trial, and her lawyer worries that Laura’s own words might be her downfall. 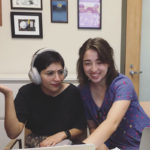 Hosts of The Orange Tree